LAWSUIT: Former FDA commissioner Margaret Hamburg bribed her way into the FDA by handing over money to Hillary Clinton and Barack Obama 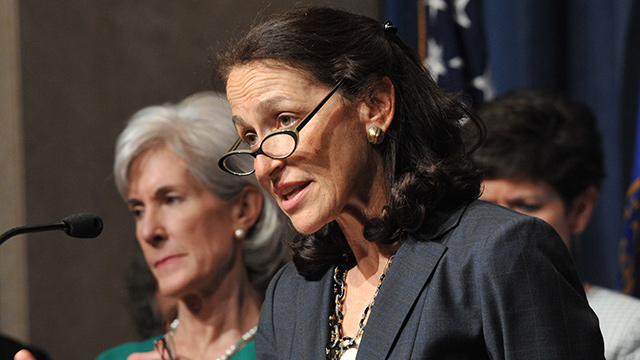 (NaturalNews) The more Barack Obama and Hillary Clinton try to portray themselves as aloof from the nasty business of politics, the more we learn that they are hip-deep in precisely the kind of shenanigans and chicanery that have driven tens of millions of voters to outsider presidential contenders this election cycle.

According to a lawsuit filed in the U.S. District Court for the District of Columbia, Margaret Hamburg, the former head of the Food and Drug Administration, is accused of using the agency to operate a huge conspiracy of racketeering and fraud so that she could generate millions of Big Pharma profits for a hedge fund involving her husband.

The suit alleges that while acting as the commissioner of the FDA, Hamburg was engaged in a wide-ranging conspiracy to approve a very dangerous drug that was known to cause severe and even deadly side effects, as it would financially benefit her husband’s hedge fund, which at the time held large positions in the drug’s maker, Johnson & Johnson.

“Defendants, each and every one of them, operated a criminal conspiracy at least between the years 2009 to 2015 to fraudulently suppress warnings about the devastating effects of Levaquin,” the complaint noted.

“This Amended Complaint sets forth allegations that involve a conspiracy by Defendants, each and every one of them, to reap large financial returns by failing to disclose to Plaintiffs and the public at large the full extent of the devastating, life-threatening, and deadly effects of a highly dangerous pharmaceutical drug named Levaquin,” says the suit, whose plaintiffs allege that more than 5,000 people died as a result of Hamburg’s conspiracy and cover-up at the agency she ran.

The suit opens with this summary:

Once confirmed as FDA Commissioner, Dr. Margaret A. Hamburg acted as the instrumentality that all Defendants used to perpetrate their conspiracy and racketeering enterprise by having her act illegally and outside the scope of her authority as FDA Commissioner to suppress material information to Plaintiffs and the public that Levaquin was inherently dangerous and in fact, deadly. Had this information been disclosed to Plaintiffs and the public at large, her and her husband’s financial gain and net worth would have plummeted, since Dr. Margaret A. Hamburg’s husband, Peter F. Brown, reaped and continues to reap huge financial gain as a result of Renaissance Technologies, L.L.C.’s holdings of Johnson & Johnson stock.

To further this conspiracy, Dr. Margaret A. Hamburg, acting in concert with each and every Defendant, jointly and severally, appointed officials of Johnson & Johnson to key FDA Advisory Committees and colluded with Johnson & Johnson and its officials and subsidiaries to suppress information about the dangerous and deadly effects of Levaquin. As a result, during Dr. Margaret A. Hamburg’s tenure as FDA Commissioner from 2009 to 2015, over 5,000 people died as a result of consuming Levaquin and other dangerous drugs promoted, manufactured, marketed, distributed and sold by Johnson & Johnson, suffered debilitating, life-threatening, and deadly illnesses and effects. This deadly harm is continuing as Plaintiffs and thousands of other people are suffering and dying from the highly dangerous effects of Levaquin.

The plaintiffs – Terry Aston of Baltimore; John Fratti of Hummelstown, Pa.; Linda Martin of Phoenix, Az.; David Melvin of Chatsworth, Ill.; and Jennifer Wilcox of Oroville, Calif. – are represented by attorney Larry Klayman of Judicial Watch, a legal watchdog group, The Daily Caller News Foundation reported. They all claim to have suffered a range of side-effects from the drug, including muscle twitching, abdominal pain, kidney and liver damage, hair loss, depression, psychosis, and hearing and vision problems, among a host of other issues, as a result of taking Levaquin.

What the suit further alleges is that Hamburg was appointed to her position by President Obama after giving “gratuities” and political contributions to HillaryClinton, Barack Obama, and the political action group she co-founded with her ex-president husband, the Clinton Family Foundation:

Dr. Margaret A. Hamburg was nominated as a result of huge political and other gratuities to Hillary Clinton and The Clinton Foundation, and at Mrs. Clinton’s recommendation. During the confirmation process before Congress, Dr. Margaret A. Hamburg, acting in concert with her husband, Peter F. Brown and the other Defendants named in this Amended Complaint, at all material times the Co-CEO of a hedge fund named Renaissance Technologies, L.L.C., failed to disclose to Congress and other relevant authorities, her and her husband’s clear-cut conflict of interest –specifically, that Renaissance Technologies, L.L.C. held hundreds of millions of dollars of Johnson & Johnson stock, the manufacturer of the deadly drug, Levaquin.

… Defendant Hamburg, on behalf of all of the Defendants as part of this racketeering conspiracy, gave political contributions and gratuities to Hillary Clinton in 2005, 2006, 2007, and 2008 to induce Mrs. Clinton to recommend and push for Defendant Hamburg to be nominated by President Obama.

… Defendant Hamburg, on behalf of all of the Defendants as part of this racketeering conspiracy, gave political contributions and gratuities to President Obama to induce him to nominate her to be appointed as FDA Commissioner.

Remember, too, that though Hillary Clinton has publicly struck out at the pharmaceutical companies, her campaign has received the most donations from Big Pharma, as well as tens of millions from big financial houses and petrochemical firms.

The Daily Caller noted that the plaintiffs are seeking $870 million in punitive and other damages, as well as a jury trial.